Struggling to get by in a “model global city”

Adam Turl talks to some of the people gathered at a food pantry on the northwest side of Chicago.

THE FOOD pantry at the Logan Square YMCA, on the northwest side of Chicago, starts distributing food at 10 a.m., but groups of people begin assembling earlier--by 9 a.m., as volunteers unpack boxes of food in the parking lot.

Among those milling about in the parking lot--mostly Latino and African American--are women in union jackets, families with young children and retirees sitting on benches. Almost anyone you talk to is working, or just lost their job, or is trying to make ends meet on a pension.

This scene is being repeated in almost every neighborhood in the city, and many of the suburbs besides. The Logan Square pantry, which distributes food on the first Tuesday of each month, is just one of 600 food pantries, soup kitchens and shelters that receive food from the Greater Chicago Food Depository (GCFD).

Last year, the GCFD distributed more than 40 million pounds of food in the Chicago area. This year, it expects the demand to be much higher. For its part, the Logan Square YMCA food program was providing food to around 150 people just a few months ago. Now, more than 250 people arrive looking for help. 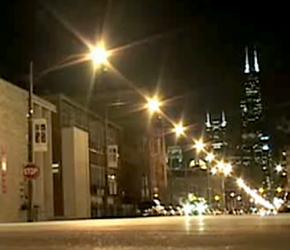 Benjamin Ortiz, a YMCA employee, pointed out that "the line gets bigger and bigger every year." Jeannette Robles, another employee who helps coordinate the food pantry, explained that the program had arranged for food for 300 people when the pantry's July day arrived.

The increase isn't hard to explain. Statewide unemployment shot up from 5.4 percent to 6.4 percent in May--the biggest one-month increase in more than two decades.

One of the people behind that statistic is Richard McBride, a laid-off African American factory worker. Richard recently lost his job making brass furnishings and was waiting in the YMCA parking lot with his family.

"The reason the economy is hurting is because the Republican Party is a big-business party," Richard said. "We need a candidate like Barack Obama to bring the troops back home. You can't live on $7 an hour in this country."

Also waiting was Florita Acevedo, who worked in local Democratic Party politics for 19 years. She remarked that she "didn't know who to vote for because after 19 years...nothing has changed."

Gesturing to a Mexican woman beside her, Florita explained: "Her husband was just deported last week while she was having a baby. What is she supposed to do? Why are they splitting up hardworking families? People are suffering, and today, the city tax goes up to the highest in the nation. What is a new president going to do about that? Nothing."

FLORITA WAS talking about the sales tax hike for Cook County, which includes the city of Chicago. On July 1, the day the food pantry in Logan Square was open, the Cook County sales tax rose to 10.25 percent.

Cook County Board President Todd Stroger pushed through the tax hike to close a shortfall in the county's $3 billion budget--thus putting the burden of closing the gap on the backs of workers and the poor. The sales tax hike is compounding the effect of food and fuel inflation. Chicago gas prices, the highest in the country, have risen more than 30 percent since the beginning of the year.

All this has caused an abrupt cut in living standards--and pushed some people, even if they have jobs, into a position where they need the food distributed at the YMCA.

An older woman, also waiting in the parking lot, said she had moved back to Puerto Rico--she was back in town visiting relatives--because while the "economy is bad everywhere, it's worse here...I live on a pension, and I can't live in the city. The prices of everything are rising...

"I used to ride the city bus for a nickel. I spent $100 in gas last month. For me, that is a lot of money. I deserve this program. I've worked very hard... But I see no end to this, the way corn and cooking oil are going up, what we have to do is look for an alternative."

Margarita, who worked for Marshall Fields department store for 25 years before being forced to retire early, waited in line to get food for her son. "Social Security doesn't pay enough to cover the costs of my utilities and medications for diabetes," she said. "But I have it better than my son, who has five kids, so I bring the groceries over to his place for them."

Johnnie, a Mexican immigrant who has worked in the U.S. for more than five decades, comes to the pantry every month to, in his words, "get over the hump." He has $12,000 in credit card debt, and he can't sell his house because of the collapsing housing market. Nor can he afford to keep paying his mortgage.

According to the Chicago Tribune, pressures on older workers like Johnnie have created a spike in first-time homelessness among those over the age of 50.

A few years ago, Mayor Richard Daley tried out a new public relations line that Chicago was the world's "model global city." Today, Chicago is becoming a model of the growing crisis facing workers and poor people around the world--in other words, a "model city" where workers, children and retirees increasingly can't afford to eat.

Charles Prusik and Sherry Wolf contributed to this article.