Adam Turl explains how pressure from below persuaded the Cook County sheriff to stop putting people out of their homes.

Dart announced October 8 that his office would no longer forcibly remove residents from foreclosed properties, essentially imposing a moratorium on any mortgage-related evictions in the third-largest city in the U.S. and a surrounding county, with a total population of 5.3 million people.

Foreclosures are expected to reach a record high of 43,000 in Cook County this year, and the sheriff's department was expected to conduct 4,500 foreclosure-related evictions. Two thousand people are evicted from their homes every month in Cook County--as many as 500 as a result of a foreclosure.

The Cook County moratorium applies to foreclosed homes, condominiums and apartment buildings. Renters will still be evicted for reasons not related to foreclosures. Still, this is the first moratorium on such evictions in a major urban area--at least in living memory.

Dart cited the cases of renters unjustly thrown out of their apartments as a result of the mortgage crisis--at least a third of such foreclosure evictions affect renters, he said. "These mortgage companies only see pieces of paper, not people, and don't care who's in the building," Dart said. 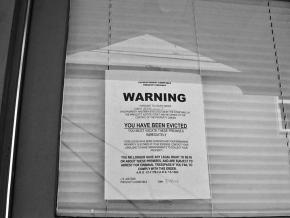 "Just in the past month," he continued, "about a third of the people we were asked to evict were under very questionable circumstances. It got to the point that enough was enough."

Dart is demanding that banks and mortgage lenders send representatives to notify residents of impending foreclosures at least 120 days in advance.

While renters and homeowners will sigh with relief at the moratorium, the bankers are hopping mad. The Chicago Tribune, acting as a mouthpiece for its friends in the city's business establishment, called the moratorium "curious" and claimed that it might be "confusing" for both homeowners and banks.

The Illinois Bankers Association charged the sheriff with breaking the law and "vigilantism," and insisted that the moratorium "should not be tolerated."

But it is the banks that have repeatedly broken the law. Chicago recently passed an ordinance that gives renters at least 90 days' notice of an impending foreclosure-related eviction. But lenders haven't been following the rule.

Call the Cook County Sheriff's office at 708-458-1000 and ask them to make the moratorium on foreclosure-related evictions permanent until there is a national bailout plan for homeowners.

The Tribune reported that "some mortgage experts" have "suggested" the moratorium on evictions "could compound problems by making lenders reluctant to extend credit at a time when loans are already hard to get." The president of the Illinois Mortgage Bankers Association agreed, telling reporters the moratorium "would have a significant impact, because obviously lenders would be hesitant to lend if they knew if someone defaulted, they wouldn't be able to take the property back."

Setting aside the question of why anyone, in the face of the current crisis, should trust anything a mortgage banker says, this argument is absurd on its face.

There is an international credit crunch underway, with banks refusing to lend to other banks and businesses, but this is because of the mountains of bad debts these banks have run up over years, mostly on immense speculative investments in obscure financial markets. The idea that a few thousand people getting to stay in their homes would make a dent in this crisis is ridiculous.

More to the point, these banks just got an immense bailout for the crisis they created in the first place. Why should there be no break at all for working-class homeowners and renters?

DART'S OFFICE may be found in contempt of court if it refuses to carry out court orders to evict. The banks are likely to pursue this in court.

Dart acknowledged that he may be breaking the law, but said his department "will no longer be party to something that's so unjust."

Other sheriffs around Chicago have less problem being "party to something that's so unjust." A spokesperson for Will County Sheriff Paul Kaupas said, "If we disregard the law, what kind of message are we sending?"

Nobody should be under the illusion that Dart is a latter-day Sid Hatfield--the turn-of-the-last-century police chief of Matewan, W. Va., who sided with workers against company thugs in the coalfield wars. Dart's office has done despicable things, especially to Black and Latino workers and poor youth.

But Dart is a politician, and he's feeling pressure from below. In particular, activists in the northwest side neighborhood of Albany Park aggressively pursued the sheriff's office after they were nearly evicted from their apartments.

As Chicago Sun-Times columnist Mark Brown reported, "Albany Park Community Council and the neighbors it represents...brought to Dart's attention the insane way banks were being allowed to evict innocent tenants whose landlords had lost their properties through mortgage foreclosure proceedings--even when the tenants had paid their rent and knew nothing of the problems."

The people in Albany Park started fighting back after one of their neighbors was bullied by a real estate agent trying to get them to move. They then discovered they were victims of a real estate scam when deputies were called to their suddenly foreclosed apartment building to evict them, even though they were all paid up on the rent.

As Dart put it, "The people in Albany Park opened a lot of people's eyes in a hurry." Their example shows the importance of people standing together in struggle.