Adam Turl explains how the payday loan sharks get away with their rip-off.

Saint Peter, don't you call me 'cause I can't go
I owe my soul to the company store

THE COMPANY store that used to prey on coal miners and their families, locking them forever into debt bondage, is mostly gone. But capitalism, always innovative, keeps coming up with new ways to prey on workers and pick their pockets.

The inglorious roots of the now infamous sub-prime mortgage lending "industry" were in storefront moneylenders, known as retail consumer finance offices. Some employed their own repo men to take back consumer goods purchased on defaulted loans. Sometimes, the loan officer and repo man was one and the same person.

In the 1970s, some retail consumer finance offices began to make high-risk mortgage loans. "Respectable" banks and corporations later followed them into this lucrative market. They're still reeling from the experience.

But the modern version of the storefront moneylender--the payday loan industry--is making more loans than ever.

Payday loans are short-term loans that are paid back quickly--when the next paycheck arrives. The fee for the advance, while seeming to be relatively modest, adds up to an outrageous rate when calculated on an annual basis, like interest rates are for other loans. 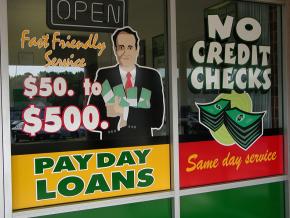 The payday loan sharks are hoping to seize the opportunity presented by the recession, and expand into the suburbs and online. As other routes for credit (credit cards, above-the-board bank loans and mortgages) become harder to come by, payday lenders are set to take up the slack--and rake in the cash.

Workers today are essentially compelled to go into debt. While they aren't directly forced into debt by their bosses (as was the case with the old-time company stores), they have to resort to the likes of payday loans because paychecks fail to pay the rent and put food on the table.

For example, the Center for Responsible Lending (CRL) estimates that every year, more than 15 million U.S. workers pay nearly $8 billion to borrow $50 billion from payday lenders--an astonishing rate of profit for these lenders. Many predict that the recession will only cause these numbers to grow.

The payday loan industry is driven by two engines: the deregulation of consumer finance and the downward pressure on workers' wages over the last 30 years. Thus, the number of payday loan outlets mushroomed from zero to more than 25,000 in just 20 years. According to the state of California, the volume of payday lending is 10 times higher than a decade ago.

Payday loan companies differ from the 1960s storefront moneylenders because they tie their loans directly to future paychecks, and charge exorbitant and usurious interest rates that were largely illegal in the 1960s. These payday lenders are akin to "salary-buying" loan sharks in the early 1900s that charged 300 percent interest rates--targeting largely working-class immigrant neighborhoods.

TODAY'S PAYDAY loan companies generally charge around $20 for every $100 loaned over a two-week period--amounting to an annual interest rate of over 500 percent. These extortionate rates outdo even the worst of the "salary-buying" loan sharks of the previous century. The CRL estimates that the average payday consumer ends up paying $800 to borrow $300.

One of the largest companies, Tennessee-based Check Into Cash, offers one of the "better deals," with annualized interest rates of "only" 459 percent. (Check Into Cash's founder is estimated to be worth $500 million).

As the Los Angeles Times paraphrased critics, these companies essentially set "debt traps for the working poor," hooking "them into an endless cycle of repeat borrowing." The mounting financial pressures facing workers leave them with few options. Once in the grip of these lenders, the pressures only get worse.

As the Times reported, Sheryl Loebig took out six payday loans to buy a new car so she could get to work when her old car died in 2006. She had no other credit options open to her, since health care bills had forced her to declare bankruptcy. Two years later, she still owed $1,000, although she had paid $7,000 in fees, while renewing the loans every two weeks.

The newspaper also chronicled the struggle of DeQuae Woods, who paid $1,800 in interest on a $450 payday loan from the Missouri-based Quick Cash. She later started a class-action lawsuit against the company alleging that Quick Cash violated Missouri lending laws.

The Times also pointed out that borrowers are frequently forced to "roll over or 'flip' their loans into new ones, sinking ever deeper into debt." According to the CRL, some 99 percent of payday loans go to repeat borrowers, and payday loans are "flipped" eight times on average, more than doubling the cost of the loan.

As with past loans of this kind, payday loans disproportionately go to minorities, much like sub-prime housing loans. For example, one study shows that even when income is taken into account, Black neighborhoods in North Carolina have three times as many payday outlets as majority white areas.

IN THE heady days of the boom, state governments exempted payday loan companies from laws limiting interest rates. Local politicians were rewarded handsomely by the industry. A study by the National Institute of Money in State Politics showed that state-level candidates in California between 1999 and 2006 received more than $800,000 in contributions from payday corporations.

However, the economic crisis and public opinion are prompting new regulations on payday lenders. For example, New Hampshire, Oregon and Ohio have all passed laws to curtail payday lending.

New Hampshire has capped annual payday loan interest rates at 36 percent, although Advance America--another large payday company--has already announced that it is looking for loopholes in the new law. Oregon has capped interest rates at 36 percent. Washington, D.C., capped rates at 24 percent and Ohio has capped rates at 28 percent. The State of Arkansas is suing 20 payday lenders that violated the state's 17 percent cap on loan interest.

The U.S. Congress passed a law limiting interest rates on payday loans for members of the armed forces to 36 percent. In fact, the CRL has noted that one of the main targets of predatory payday loans) has been military personnel. In 2004, the New York Times estimated that one-fourth of military households had to resort to payday loans.

The new laws are propelling a rush toward online loan operations with companies hoping to escape state regulations. For example, the Chicago-based CashNetUSA (owned by Cash America International, Inc., a national chain of pawn shops) is hiring dozens of new employees for its online payday loan operation. In September, the state of Illinois fined CashNetUSA $30,125 for accounting "errors" in the company's favor.

But while payday loan operations expanding rapidly, parasitic lending has always been endemic to capitalism.

As Karl Marx observed 160 years ago, "No sooner is the exploitation of the laborer by the manufacturer, so far, at an end, that he receives his wages in cash, than he is set upon by the other portions of the bourgeoisie, the landlord, the shopkeeper, the pawnbroker, etc."

Today, rising outrage at these lenders has pressured the government into taking at least some action against payday lenders. But the bigger problem is that more and more workers are not being paid enough.

The only way to marginalize the payday loan is good, old-fashioned class struggle. That means organizing to demand higher wages, more benefits and better working conditions. Because as another old song about coal miners put it, "Us poor folks haven't got a chance unless we organize."