McCarthyism and the civil rights movement

Lee Sustar looks at the impact of the 1950s era of reaction on the Black struggle.

BY MOST accounts, the civil rights movement began in 1954, created by the U.S. Supreme Court decision that outlawed racial segregation in the public schools.

Yet the anticommunist witch-hunts of the previous years had an enormous negative impact on the struggle. This reality tends to be ignored by those who want to downplay the role of the left in the fight for Black rights--and because of the participation of many "liberal" civil rights leaders in the witch-hunt.

In the 1930s, two organizations had been in the forefront of the struggle for Black rights--the Communist Party (CP) and the Congress of Industrial Organizations (CIO). But after the U.S. entered the war, CIO leaders dropped the anti-racist battle for the sake of "unity" in the war effort.

Taking its cue from President Roosevelt's alliance with Stalin's Russia, the CP became the chief enforcer of such pro-war policies within the working-class movement--breaking strikes and attacking as "divisive" the NAACP's demands for nondiscriminatory hiring in defense industries. 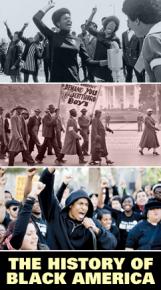 Rather than press for Black jobs, the CP sought to muster Black organizations for the "defense of the democratic institutions of our country"--by supporting the war. The CP denounced the mild civil rights demands of A. Philip Randolph's planned 1941 March on Washington as "dangerous" and "belligerent." The party went so far as to accuse Black participants in the 1943 Harlem race riot of playing into the hands of the Nazis.

Such politics came back to haunt the CP after the war, when President Harry Truman launched a vicious anti-communist crusade as a means to justify an aggressive, anti-Russia policy abroad and attacks on militant workers at home. Although CP members played a leading role in the 1946 strike wave--the biggest in U.S. history--the CP's political support had declined dramatically.

By effectively siding with the bosses during the war, the CP was isolated from rank-and-file workers when CIO officials joined the witch-hunt. In the effort to strengthen their position within organized labor and gain influence in Truman's Democratic administration, the CIO ultimately expelled 11 member unions for alleged ties to the Communist Party, with relatively little opposition from most members.

The History of Black America

One of Socialist Worker's earliest features was a monthly series on the history of the African American struggle in the U.S., from slavery to the present day.

All articles in this series

Union support for Black struggles withered in the right-wing atmosphere. The expelled CP-influenced unions, such as the United Electrical Workers, the Mine, Mill and Smelter Workers and the National Maritime Workers Union had outstanding records of organizing Black workers and support for civil rights issues. This point was not lost on racists, both in and out of the labor movement, who accused anyone opposed to Jim Crow segregation of being a "red."

CIO leaders such as Philip Murray and Walter Reuther sacrificed their "Operation Dixie" organizing drive in the South for the sake of unity around anti-communist politics. In practice, the CIO became indistinguishable from its openly racist rival, the American Federation of Labor.

The witch-hunts spread to established civil rights organizations, with NAACP and National Urban League leaders backing Truman in the 1948 elections in exchange for desegregation of the military and the president's support for civil rights legislation. Leaping at the chance to eliminate the CP's influence among Blacks, NAACP President Walter White took the opportunity to fire the organization's founder, W.E.B. DuBois, for his Marxist politics. In 1952, at the age of 82, DuBois was arrested on charges of being a "foreign agent."

Yet after Black votes gave him his thin margin of victory in the 1948 election, Truman went silent on civil rights. By the early 1950s, even liberal Black groups like the NAACP were denounced as subversive by Sen. Joe McCarthy's anti-communist campaigns. Libraries banned much pro-civil rights literature as well as left-wing materials.

DESPITE HAVING grown to 450,000 members by 1946, the gains of the NAACP were outstripped by rising Black membership in organized labor. By 1955, Blacks numbered nearly 2 million organized workers--about 11 percent of the total.

The CP and the expelled CIO unions recognized the potential power of this growing Black working class. Driven from the mainstream labor movement, and with many of its leading members in jail, the CP reemphasized Black struggles--a last-ditch attempt to retain mass influence among workers.

In 1950, about 900 Black and white labor activists--including members both in and out of the AFL and the CIO--met in Chicago to convene what became the National Negro Labor Council (NNLC).

The organization's biggest victory came in 1953 during the campaign to "let freedom crash the gates of the South" in Louisville, Ky. Along with the United Electrical Workers Union, the NNLC led a campaign that forced General Electric to hire Blacks as production workers rather than for janitors only.

Led by UAW Local 600 Recording Secretary William Hood, the NNLC sharply criticized UAW and CIO President Walter Reuther for his opposition to appointing a Black to the union's international executive board. (Reuther had rejected such proposals since 1943, calling them "racism in the reverse.") In response, Reuther labeled the NNLC as a "communist front," charging it with "dual unionism."

In 1952, Reuther fired four Local 600 officials, two of whom were Black. But the Dearborn, Mich., Ford local, with more Blacks than any other local union at that time, stood by Hood. Reuther was unable to remove him.

Despite its modest success, the NNLC voted to dissolve itself in 1955. Faced with government investigations, right-wing harassment and mounting financial pressure, the organization simply could not go on. At the same time, the CP was driven virtually underground.

By the mid-1950s, Black workers faced several bleak choices: support for the embattled Communist Party, whose commitment to Black struggle had never been consistent; following anti-communist union bureaucrats who promised to fight for Black rights, but delivered little; or joining with accommodationist Black middle-class leaders who placed their hopes in the racist Democratic Party.

Cut off from the tradition of militant struggle, a new generation of civil rights activists would be forced to rediscover radical politics on their own. But rediscover them, they did.

First published in the July 1986 issue of Socialist Worker.

From Harlem’s “Lenin” to AFL bureaucrat

The roots of the civil rights movement