If Barack Obama really wanted the Guantánamo Bay prison camp shut down, he could have done it years ago. Nicole Colson explains why he's retreated again and again.

BARACK OBAMA says he's really, finally, actually going to close down the U.S. prison camp at Guantánamo Bay, Cuba--more than seven years too late, and with a plan that's designed to fail because of the opposition of a Republican Congress.

Obama's declaration is less of a policy change and more of an election-year p.r. stunt designed to remind potential voters that the Democrats at least make the pretense of being concerned about human rights.

As Obama made the announcement last week, the Pentagon submitted a plan to Congress that would transfer approved detainees abroad and move the rest to a facility or facilities on U.S. soil. Currently, Guantánamo holds 91 detainees. Some 35 have been cleared, or are expected to be cleared, for release and transfer by this summer. The remaining detainees would be sent to one or more of 13 potential locations reportedly included in the plan.

But Obama's proposal is not only short on details. It's already facing howls of outrage and promises of obstruction by Republican officials irate about the administration supposedly putting American lives in harm's way by allowing "terrorists" to be housed on U.S. soil--and, of course, the White House knew it would happen. 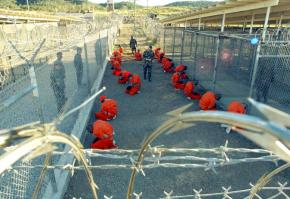 Senate Majority Leader Mitch McConnell was typical, telling the Guardian: "The president likes to kill terrorists--and I think that's great, I'm all for killing terrorists--but even more important is to capture terrorists and interrogate them and try to find out what they know. The president doesn't seem to be very interested in interrogation."

This posturing is as disgusting as it is ridiculous. The vast majority of detainees brought to Guantánamo since the early days of the "war on terror" have been quietly released to other countries--because there was never much, if any, evidence that they had anything to do with terrorism. They were more likely to have been swept up by various security forces of American "allies" in the Middle East who targeted them for political, financial or other reasons.

As Trevor Timm wrote in the Guardian:

Republicans apparently still cling to the wholly imagined, cartoonish version of Guantánamo detainees. They believe that, if they're held in a Supermax prison inside the United States, they will somehow gain X-Men-level superhuman powers on a par with Magneto and will be able to escape facilities that no one has ever escaped from before and wreak havoc on local communities.

SO THE Obama administration is once again talking about shutting down Guantánamo. But don't think the White House is suddenly repudiating the right of the U.S. to hold prisoners in the "war on terror" indefinitely--which Obama has defended since his early days in office.

Just 10 of the detainees currently at Guantánamo have been convicted on terrorism charges or even have pending cases. The fate of those not slated for release is uncertain.

This has produced bitter resistance among the prisoners, as Baher Azmy, legal director for the Center for Constitutional Rights (CCR), wrote in Rolling Stone, singling out the case of a CCR client, Tariq Ba Odah:

Having been cleared for release, but with no prospect of actual release, he committed to a hunger strike as a means of peacefully protesting--through the only thing under his control--the cruelty and arbitrariness of his detention. As he explained to us, "My method of delivering my message is through hunger strike. You can cut me to pieces, but I will not break it. I will stop on one of two conditions: I die, or I am freed and allowed to return to my family." He has maintained his silent protest for longer than Obama has been president, enduring punitive solitary confinement for 23 hours a day as well as violent and painful force-feeding through nasal intubation every day for eight years.

Suffering the ravages of starvation, Ba Odah is now mortally sick; his skeletal body weighs in at 75 pounds. But when CCR filed an emergency petition with the court seeking his release on humanitarian law grounds that prohibit the continued detention of gravely sick detainees, the administration reflexively opposed this humane--and legal--request, so as not to weaken in any way its authority to detain other prisoners, even sick and aging ones.

Despite his promise to reverse the human rights abuses practiced by the Bush administration, Obama has defended the practice of indefinite detention since at least 2009, soon after taking office. At the time, Michael Ratner, president of the CCR, described this as "closing Guantánamo physically, but repackaging it with a little more legal gloss."

The same holds true today. Obama's new plan to close Guantánamo would merely relocate the injustices for many prisoners to a facility on U.S. soil.

MANY LIBERALS are cheering Obama for taking a "bold" step as his time in office draws to a close.

With the end of his second term in sight, goes the thinking, the president doesn't have to worry about obstructionist Republicans--he can muscle through all of the big policy issues that he's wanted from the beginning of his time in office.

But this ignores the fact that Obama, as an enormously popular commander-in-chief when he first took office, could have taken steps to close Guantánamo, but refused to do so. Rather than exercise his authority to close Guantánamo--and fight back against any Republican attempt to stop him--Obama retreated on this issue, time and again.

Obama doesn't need Congress to close Guantánamo--he never has. As two former Obama administration officials--Gregory Craig, the White House counsel in 2009, and Cliff Sloan, the special envoy for Guantánamo closure in 2013 and 2014--wrote in November:

Under Article II of the Constitution, the president has exclusive authority to determine the facilities in which military detainees are held. Obama has the authority to move forward...Congress has enacted legislation banning the use of funds to transfer Guantánamo detainees to the United States for any purpose, including incarceration and prosecution. But that irrational prohibition need not inhibit the closure of the facility. The restriction is plainly unconstitutional.

But then again, the Obama administration has been equally committed to prosecuting the "war on terror" as its predecessor--though with a slightly more humane face.

Writing in the New York Daily News, Cori Crider, strategic director at Reprieve, an organization of lawyers and investigators that handles cases of torture and indefinite detention, lays out in detail Obama's multiple failures on Guantánamo and detainee rights, starting with his retreat on plans in 2009 to allow a group of innocent and cleared detainees to resettle in Virginia, through his reliance on unjust military tribunals and beyond. Crider adds:

Then there are those whom the President slated for indefinite detention--so-called "forever prisoners." This designation was unnecessary, and fed the myth that Guantánamo was full of dangerous men. The Defense Department is now clearing the vast majority of them, finally showing how overstated their "dangerousness" really was...

The prisoners I represent at Guantánamo followed Obama's 2008 campaign. They read his books. They even, the story goes, chanted his name when he won. But when the president criticizes Congress for blocking his final Gitmo plan, he has one man to blame: himself.

Obama's failure to close Guantánamo wasn't an accident--it was by design. It was easier for the president to shrug his shoulders and blame Republicans for Guantánamo's continued existence than to admit it simply was never high on the list of priorities for his administration--because Obama and the Democrats remain equally committed to the "war on terror." That's still true today.