A WORKER finds himself debt-ridden, unemployed and forced from his home. He is like many others in the U.S., with one difference--he is an H-2B guest worker from India, brought to work for Signal International.

Fired for trying to organize for better working conditions, he was imprisoned on company property and threatened with being returned to India, where he had sold his home to pay the $20,000 recruitment fee for a 10-month work visa (H-2B).

In many ways, this worker, Sabu Lal, faces the same problems native U.S. workers confront: lower wages than promised, high debt, no home and job loss because he organized to improve his conditions. But as David Bacon points out in his new book Illegal People: How Globalization Creates Migration and Criminalizes Immigrants, immigrant guest workers play a cutting edge role in providing U.S. employers a low-wage, flexible and largely silenced workforce in a globalized economy.

All immigration reform bills seriously discussed by Congress in 2006 and 2007 included a huge expansion of guest-worker programs in exchange for a limited "earned legalization" for undocumented workers who currently live in the U.S. 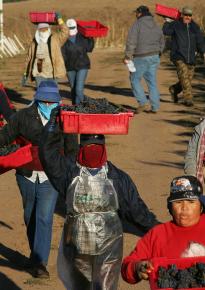 Bacon's new book humanizes the stories of undocumented workers and current guest workers trying to survive in the U.S. He follows the lives of Guatemalan tree planters, Filipino workers in Silicon Valley's high-tech, highly toxic sweatshops and indigenous Mexican workers from Oaxaca in California. Bacon not only examines their lives in the U.S., but also explores the causes of conditions in immigrants' countries of origin and what drives them to migrate.

Bacon, a journalist and former labor organizer, analyzes the abusive history of former bracero (guest-worker) programs, the legion of racist anti-immigrant laws passed throughout U.S. history, and how these have increased the profits of companies while producing tiers of first-, second- and even third-class workers at the mercy of employers.

The author makes a clear case for why undocumented workers ("illegal people") deserve to be given legal status, and how expanding guest-worker programs would wreak havoc on all workers' lives in the U.S. Bacon focuses on immigrants' role as workers and community activists, in their home countries and in the U.S. They are thus potential allies with tremendous organizing experience that native U.S. workers cannot afford to exclude.

MOST "COMPREHENSIVE immigration reform" packages--although not discussed in the current presidential campaigns--have accepted the Essential Worker Immigration Coalition's (EWIC) formulations for what is acceptable in immigration reform. Formed in 1999 under Bill Clinton, the coalition doesn't include "essential workers," but primarily employers' associations.

Throughout debates about immigration reform under Clinton and George W. Bush, EWIC pushed a plan that would "create a tier of workers with none of the rights and social benefits U.S. workers won in the New Deal." Guest workers would be workers with no political or labor rights whatsoever.

The deal of limited amnesty for expanded guest-worker programs was at first tied to the purported labor shortage claimed by employers, the New York Times and Wall Street Journal, and then politicians. Bacon points out that workers' organizations like the Coalition of Immokalee Workers in Florida, and even the Congressional Research Service, could find no evidence of a labor shortage--just low-wage jobs and conditions unacceptable to U.S. workers who could not be deported.

Yet the EWIC used the claim of "labor shortage" to justify expanding guest-worker programs beyond agricultural or season work to all realms of employment. Clinton approved immigration raids under Operation Vanguard, in which the Immigration and Naturalization Service investigated and raided employers for hiring undocumented workers. The tactic forced them to see the advantages of a guest-worker program--legal controlled immigrant labor, disposable (i.e., deportable) at any time.

After September 11, 2001, EWIC and other politicians linked immigration control to border enforcement. Harsh penalties were proposed for immigrants working without papers and for walking away from exploitative jobs. Since then, employers, particularly corporate employers in EWIC, won their demands for strengthened border enforcement and expanded guest-worker programs in all Democratic and Republican proposals that gained support in Congress.

Many immigrant reform organizations such as the National Council of La Raza, American Immigration Lawyers Association, and National Immigration Forum, as well as labor unions--SEIU and UNITE-HERE--supported such reform packages because they promised limited "earned legalization" and guest-worker programs that "protected" immigrant workers from abuses.

Yet, as Bacon points out, no guest-worker program historically has prevented labor abuses or undocumented workers from taking even lower wages. These organizations simply accepted the terms of debate imposed by EWIC, the Republican and the Democratic parties.

WITH FRIENDS like EWIC and their supporters, how do immigrants fight for equal rights? How did they organize the massive marches of 2006 and 2007 to demand legalization for all?

Bacon studies the history of how immigrant workers have challenged U.S. labor unions. As he points out, there has always been two ways of thinking about immigrant rights (as well as women's and Blacks' rights) in the U.S. labor movement--include or exclude. Immigrant workers legalized under the Immigration Reform and Control Act of 1986 began to participate in unions and demand changes. Some labor unions listened.

By 2000, the AFL-CIO Executive Council formally called for replacing employer sanctions, which allowed employers to fire workers for being undocumented, with labor-law enforcement. This was a victory for immigrant workers against the previous racist stance of exclusion the AFL-CIO had advocated before.

Yet, while unions formally took better positions on immigration and immigrant labor rights, they did not galvanize their forces to challenge guest-worker programs or spend resources for organizing immigrants or native workers. Immigrant workers had to organize either in unions when possible, or as independent local organizations when needed.

Many of these local organizations formed the backbone of grassroots mobilization for the mass marches because they have been doing the painstaking work of fighting for better wages, against anti-immigrant and other racist state laws, and for solidarity. Bacon looks at how day laborers organize in Los Angeles as well as Oaxacan indigenous communities in California.

One of the key coalitions that Bacon examines is the Mississippi Immigrants' Rights Alliance (MIRA)--for numerous reasons. It incorporates African American workers, immigrant union organizers and guest workers from the Gulf Coast to organize together against the Klan, right-wing anti-immigrant and anti-worker legislation, and for humane conditions for all workers and victims after Hurricane Katrina.

MIRA represents a much-needed answer to how immigrants and working poor Blacks and whites can organize in a right-to-work (meaning anti-union) state--on the basis of rights of workers, and acknowledging and understanding the different types of racism groups face. Bacon points out that MIRA has taken up the necessary challenge of uniting immigrants with Black and white union and non-union workers.

Illegal People comes out at a crucial time in the immigrant rights movement. Politicians won't touch immigration reform right now. But while activists fight against deportations and raids taking place in the shadows, we must prepare concrete demands for immigration reform in 2009, during a severe economic crisis.

Bacon's book provides key arguments about how corporate globalization creates migrants, and corporations have set the terms for migrant workers' rights--only as guest workers, working for the needs of employers and disposable when not needed. If not working, immigrants are "illegal people." Immigrant and labor rights activists cannot accept guest-worker programs as the solution or "deal" for limited legalization of a few.

Bacon's book explains why, and points towards the types of grassroots and labor organizations who have successfully united workers across ethnic and race lines to fight for more humane, equal conditions.