What does tech mean for the left?

Jeffrey Boyette considers some of the questions involved in the discussion about how Marxists understand the growing "digital workforce."

IN MY hometown of San Francisco, it's impossible to ignore the dominant role played by the tech industry. A recent tech boom has fueled economic growth--as well as a groundswell of outrage over the resulting wave of hyper-gentrification. But even outside the tech mecca of the Bay Area, the proliferation of high-tech industries and digital technologies has become synonymous with economic growth.

This process has undoubtedly changed the character of work and the working class, and will continue to do so at even greater speeds as time goes on. It's crucial for the left to take stock of these changes and understand how the growing digital workforce fits in with Marxist theory and our goal of working class self-emancipation.

As we consider these questions, I want to caution against two problematic conclusions.

FIRST, AND most importantly, we should avoid letting the digitization of work be confused with the end of the traditional working class. Already, "precariat" is being widely used as the term to describe what has replaced a supposedly extinct "proletariat." 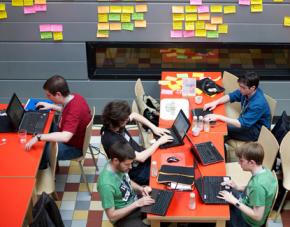 The tech industry has indeed contributed to the growing precariousness of people's jobs in a number of ways. The increased use of subcontractors and freelancers, as opposed to salaried workers, is one example.

The tech industry has also enabled a new digital informal economy, disguised as a "sharing economy"--in which everything from apartments to cab rides to reservations at fancy restaurants can be sold in a completely unregulated and untaxed market, via iPhone apps. This model takes advantage of the widespread desperation for additional income, while causing problems for previously regulated workforces, such as taxi drivers, who have a harder time maintaining a living wage.

But do these changes herald the end of the traditional working class? The answer is no.

Many people who counterpose the "precariat" to the proletariat rely on a caricature of the Marxist conception of the working class--that we are talking only about industrial workers who labor in large factories.

In fact, Marx's view of the working class was much broader. Today, alongside the growing tech industry, there is a massive service workforce and an extensive transportation and logistics workforce, which are every bit a part of the traditional working class.

Many leaders of the tech economy would be glad to see these jobs automated and eliminated. In the meantime, however, service-sector workers, and transportation and logistics workers form an important basis for workplace organization. The recent organizing amongst low-wage workers is just one illustration.

It is also important to acknowledge that the tech industry has by no means moved beyond industrial production. High-tech companies, for example, dominate what remains of the manufacturing sector in the Bay Area. Even more telling, the largest factory in the world--a walled technology park in China known as Foxconn City--builds smart phones for the largest tech companies in the world, including Apple. The harsh working conditions in this factory, which employs hundreds of thousands of workers, have led to repeated suicides and mass workplace actions.

THE SECOND danger for a left analysis of the digital economy is an inverse of the first--an overemphasis on the working class character of tech workers.

As digital technology becomes more commonplace, more and more jobs are becoming dependent on software, network technology, social networking and the like. At the same time, some formerly skilled "white collar" tech jobs have become deskilled and turned over to so-called "digital sweatshops."

In light of these changes, it is tempting to assume that there has been or will be a "proletarianization" of technology workers. Unionization of IT workers or software developers would be a welcome development--and already exists in some contexts. However, in my view, the left should not see the tech industry as a new frontier for organizing, at least not yet.

Despite the pretense that there is an inherent progressiveness to the tech industry, the dominant ideology is antithetical to class-based organization. There is certainly no homogenous political outlook among tech workers, but there is a notable trend toward libertarianism.

While some might contest this identification, there is more than a passing resemblance between libertarian thinking and the tech industry's fixation on meritocracy and its disdain for government regulation.

And some tech leaders openly embrace libertarianism. The recent Reboot 2014 conference in San Francisco, for example, made an explicit effort to unite Silicon Valley with the most bigoted libertarian leaders including, Sen. Rand Paul and Rep. Cathy McMorris Rogers (see this article from Pando Daily for a chilling description of Reboot's libertarian lineup).

Unfortunately, the reactionary politics of many leaders in the tech industry is obscured by a mythology that portrays them as outsiders and dissidents standing up to the status quo with their uncompromising, out-of-the-box ideas. These small-fish entrepreneurs "disrupt" formerly dominant big businesses and forge new pathways for progress, using the most efficient and innovative solutions. And if tech companies evade taxes and violate government regulations, they are simply bypassing bureaucratic barriers to progress--the neoliberal drive for profit has nothing to do with it.

The truth is something entirely different. As David Talbot, founder of Salon, eloquently put it:

Vast fortunes have been created overnight by raiding the intellectual content that others have painstakingly built over the years. Other new empires have risen by convincing millions of people to give up their privacy and reveal their deepest thoughts and desires for free--a kind of Tom Sawyer business model based on persuading the public that it's lots of fun to paint someone else's fence.

Much of the new tech wealth is either built on this kind of shameless piracy or on what I call the idiocy of ingenuity. You know--creating apps that are nothing more than solutions in search of problems.

The fact that so much of this new wealth is based on either trivial or downright damaging human pursuits makes it doubly hard to stomach the arrogance and self-absorption of this new tech elite. These are men--and as we know, 98 percent of them ARE men--who sincerely believe that just because they came up with some new "friction-free" way of accessing people's bank accounts, they are now entitled to run the world.

THE TECH industry's mantra of "disruption" hinges on the idea that big businesses which refuse to evolve with the times will be surpassed by small entrepreneurs who unleash innovative business models. Yet the tech industry is increasingly dominated by a handful of giant companies, owned by billionaires. In fact, the goal for tech start-ups is often not to "disrupt" larger companies, but rather to be bought out by them (see this recent New Yorker article for a thorough critique of "disruptive innovation").

It's also hard to buy the myth of outsider dissidents when you read about the complicity of leading technology companies with the National Security Agency's mass surveillance programs.

Of course, not all tech workers will hold the prevailing ideas within the tech industry. There are certainly some app developers who have purely altruistic intentions. In San Francisco, some tech workers have already joined the ranks of the anti-gentrification movement.

What's more, the very existence of the Internet has inspired a generation of technology activists--the hacker group Anonymous is only the most visible example. Tech workers have taken on Internet-specific issues such as net neutrality and also contributed to broader left campaigns. The Anti-Eviction Mapping Project, for example, has created data visualizations to demonstrate the severity of San Francisco's eviction crisis.

These examples are very relevant for our discussions on the left. They don't, however, suggest a new social base for organization. And while there are certainly examples of low-wage tech work, there is still a significant gap in income between most of the tech sector and the rest of the working class. In the Bay Area, the median salary for a tech worker is $123,000, compared to $64,000 for the average San Francisco teacher.

This wage disparity may not last forever, but for now, it is a very real barrier to class-based solidarity, especially in areas where the tech industry is most concentrated. There will be tech workers who join the fight against inequality or take part in social movements, but the material conditions of their work and lives push them in the other direction. At the very least, it should be clear that tech workers aren't a new vanguard from an inherently more progressive industry.